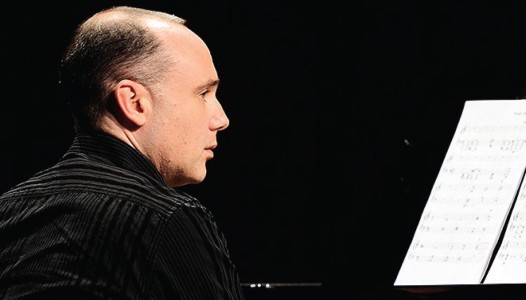 Pianist Andrew Zolinsky is one of the most distinctive musical voices of his generation.  With a repertoire ranging from Haydn to the present day, his unique style of programming and his individual interpretations have secured performances at many prestigious venues and festivals.

Andrew has given World and regional premieres of many of David Lang’s works, including, the world premiere in New York of the complete set of Memory pieces, and the Piano Concerto, Fur, commissioned by the BBC, at the Vale of Glamorgan Festival with the BBC National Orchestra of Wales conducted by Grant Llewellyn.

Andrew is also very closely associated with the music of Unsuk Chin.  He has performed her complete Etudes for solo piano on many occasions, including the French (Festival Musica in Strasbourg), London (Wigmore hall) and Italian (Venice Biennale) premieres.  Andrew also gave the London première of her Piano Concerto with the BBC Symphony Orchestra conducted by Miguel Harth-Bedoya.  More recently, as part of the BBC’s ‘Total immersion’ series in 2011, Andrew played the Double Concerto with percussionist Owen Gunnell and the London Sinfonietta conducted by Stefan Asbury at the Barbican Centre.  At Unsuk Chin’s request, he was recently invited to perform her Piano Concerto and Etudes at the prestigious French festival, Acanthes.

Andrew has recorded for Cantaloupe, Guild and NMC.  Paul Driver in the Sunday Times chose Andrew’s recording of solo piano music by Michael Zev Gordon (NMC), as one of the TOP TEN CONTEMPORARY CD’S OF 2009.  His disc of David Lang’s piano music on the Cantaloupe label was released in November 2011.

More recently, Andrew has performed at the Royal Festival Hall in London (Gerard Grisey’s Vortex temporum with members of the Philharmonia orchestra conducted by Pascal Rophe), USA, the Venice Biennale and the Huddersfield Contemporary Music Festival.  IN NOVEMBER 2013, ANDREW WILL MAKE HIS DEBUT IN THE INTERNATIONAL PIANO SERIES AT LONDON’S SOUTHBANK CENTRE; THIS RECITAL WILL ALSO BE PART OF THE SOUTHBANK CENTRE’S FASCINATING SERIES, ‘THE REST IS NOISE’. Also in November, he will make his recital debut at the prestigious Palau de la musica in Valencia.

Andrew is a professor of piano at the Royal College of Music and at Goldsmiths, University of London.

Andrew Zolinsky can be heard Cantaloupe Music's album, this was written by hand.