2017 Bang on a Can Summer Festival @ MASS MoCA Begins! 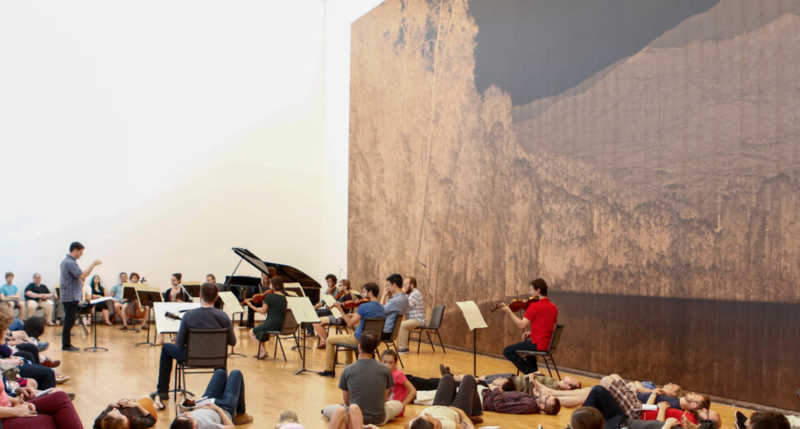 From now through August 5th, catch multiple concerts a day in potentially every gallery space in MASS MoCA by performer and composer fellows of the Bang on a Can Summer Festival (aka Banglewood), including swaths of world premieres, and a first workshopping of Gordon/Lang/Wolfe's upcoming collaborative work "Road Trip".

Take a look at the festival schedule, which features 1:30p and 4:30p recitals nearly every day, including solo shows by Bang on a Can All-Stars and festival faculty.

Weds July 19, 4:30pm - Mark Stewart performs the music of Pauline Oliveros & all folks present(!) on the wonderful musical instruments of Gunnar Schonbeck. The Return of the 9 foot Banjo!! Come and join in. No experience required.

Thurs July 20, 4:30pm - Ashley Bathgate performs  new works for solo cello by Martin Bresnick, Emily Cooley, Pamela Madsen, Jascha Narveson, Alex Weiser, and the world premiere of It Is Not A City by Randall Woolf, with the poetry of Tongo Eisen-Martin.

Fri July 21, 10pm - The Bang-MoCA MASSive Latin Big Band led by Gregg August, Joe Gonzalez, and Ben Lapidus, the Bang on a Can fellows perform for free at the American Legion bar. Bring your dancing shoes.

Saturday, July 22, 11:30am KIDS CAN TOO! Our annual perforance for kids. tickets

Tuesday, Aug 1, 4:30pm - Music from Central Asia - Musicians from Kazakhstan, Kyrgyzstan, and Tajikistan perform on traditional instruments from their countries, including the chopo choor, rubab, and dombra.

Aug 3, 4 - 10pm AFTER HOURS AT THE CHALET Spontaneous music with the fellows in our summer beer garden, which careens wildly from bluegrass to jazz to salsa to avant-ballads.