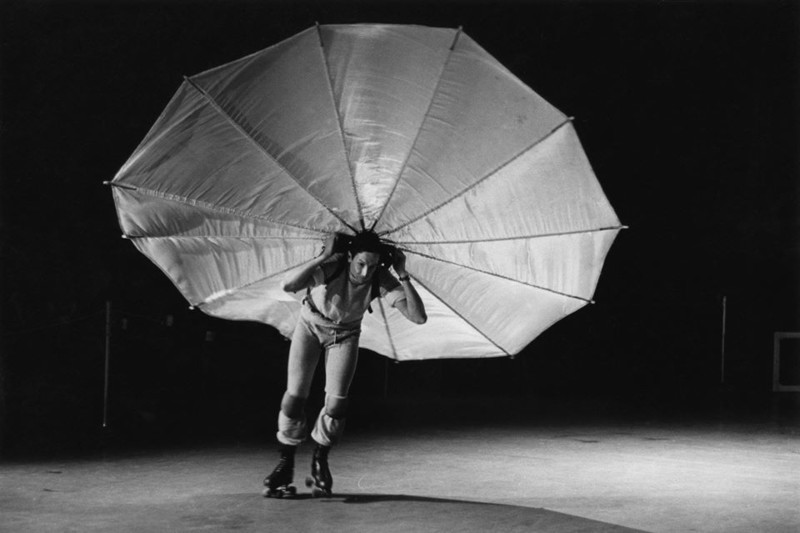 Throughout Robert Rauschenberg’s six-decade career, he moved freely between the worlds of visual art and avant-garde music. Beginning in the early 1950s, he worked closely with the composers and performers associated with the New York School, including such pioneering experimental figures as Earle Brown, John Cage, Morton Feldman, David Tudor and Christian Wolff. This rich dialogue shaped Rauschenberg’s approach to art making as well as that of his musical collaborators. In conjunction with the exhibition Robert Rauschenberg: Among Friends, Pulitzer prize–winning composer David Lang and the celebrated music collective Bang on a Can present a pair of concerts featuring commentary exploring these artistic exchanges and their legacy for contemporary music.

Tuesday May 23 and Wednesday May 24 at the Museum of Modern Art, NYC 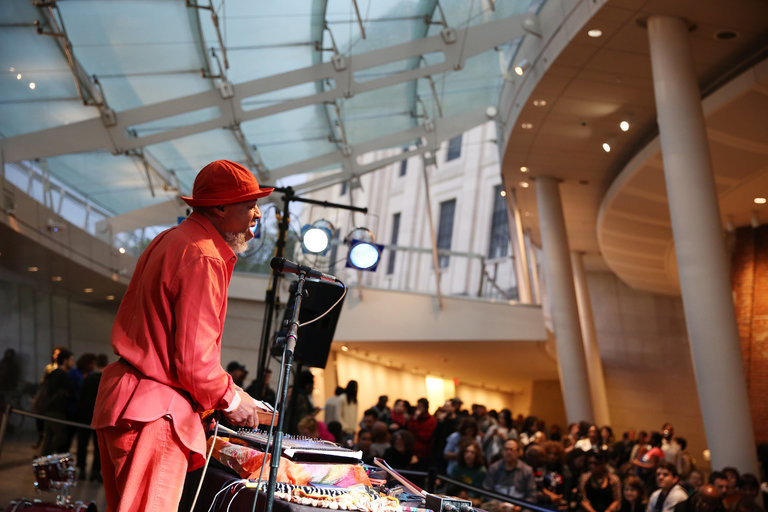 The class clowns who merrily threw spitballs at New York’s artistic landscape three decades ago are now, in more ways than one, seniors. That’s true at the Whitney Museum of American Art, where the exhibition “Fast Forward: Painting From the 1980s” makes a persuasive case for the maturity of a generation of supposed bad boys (and girls).

And it was true on Saturday in Brooklyn, where you could spend a few hours at the 30th-anniversary installment of the music collective Bang on a Can’s annual marathon concert, at the Brooklyn Museum, and then travel a mile or so up the road to Roulette, where the anarchic composer and performer John Zorn was holding court with works that were new during the Carter and Reagan years. At both events, onetime rebels had become institutions. 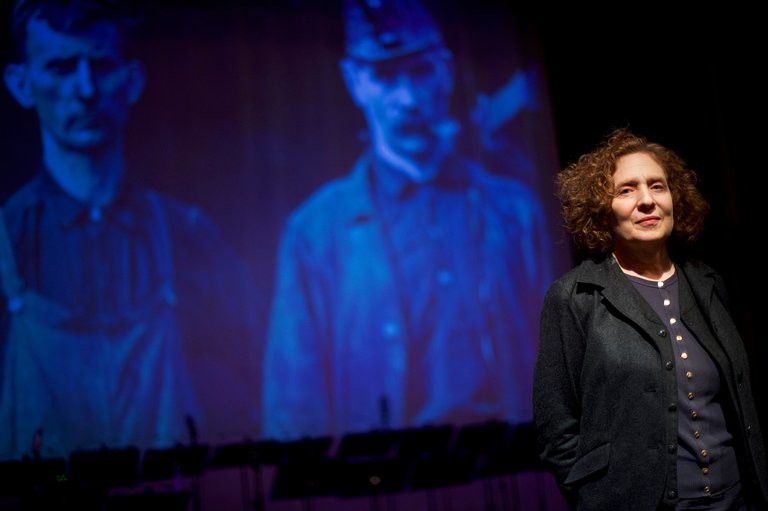 Julia Wolfe onstage at Bucknell University before a performance of Anthracite Fields, her oratorio about coal mining. Photo: Mark Makela for The New York Times

Coal is never far from the surface in northeastern Pennsylvania — as a shared heritage, if not always as actual deposits. So anticipation was already running high last week when the composer Julia Wolfe brought Anthracite Fields, her Pulitzer Prize-winning choral work honoring the sacrifices of Pennsylvania coal miners, back to her native state.

Then, just before the concerts, coal became front-page news when President Trump moved to roll back pollution regulations in the name of trying to bring coal jobs back, promising miners and coal company executives assembled for a photo op that “you’re going back to work.” Ms. Wolfe’s 2014 oratorio on work, exploitation and unionization took on new overtones as coal became a central part of the Make America Great Again hymnal.

“It feels to me like kind of a romanticization of coal miners — and that doesn’t feel good,” Ms. Wolfe said of the president’s action before a performance of Anthracite Fields on Saturday at Bucknell University here in Lewisburg, a college town nestled between coal regions. 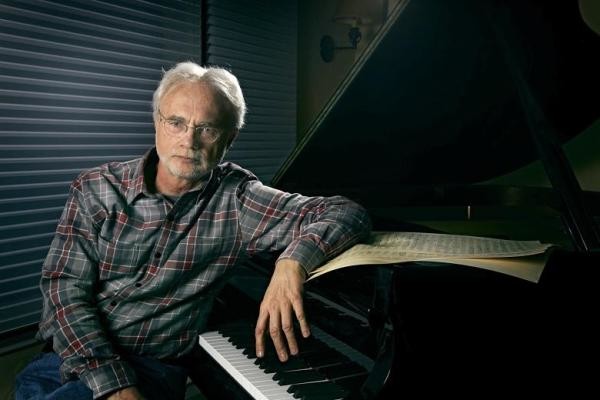 What happens when the composer shows up to the first rehearsal of his brand-new piece? Would a living Beethoven sue for intellectual property? Are you the hit, or are you in the hole? For this episode of Q2 Music's Meet the Composer, the producers collaborated with the 20-member chamber ensemble Alarm Will Sound and its conductor Alan Pierson — with whom MTC is partnering on the upcoming podcast album Splitting Adams (out April 21 on Cantaloupe Music) — to take a close look at the music of John Adams, specifically his two insanely difficult chamber symphonies. This episode offers unprecedented access to not only to the creative process, but the weird, woolly procedure of putting these massive pieces together.

Preorder Splitting Adams on iTunes here, and get an instant download of Alarm Will Sound's performance of Son of Chamber Symphony (Mvt. 3). 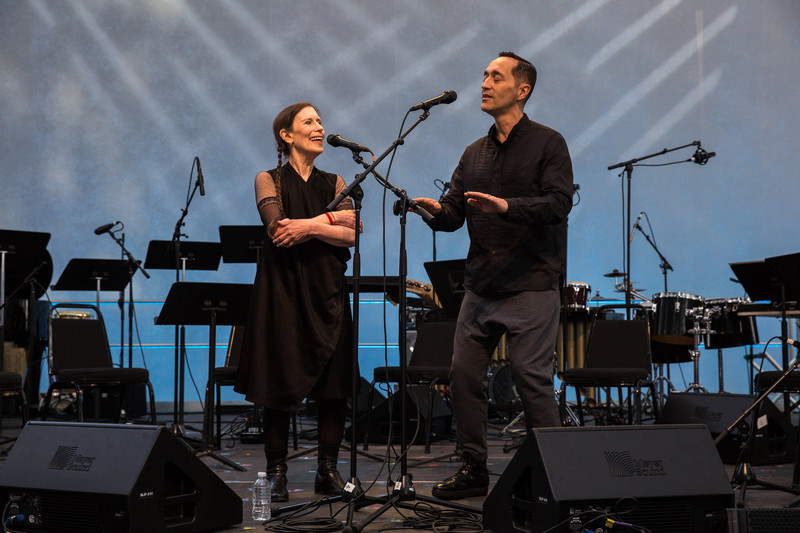 Meredith Monk and Theo Bleckmann, at the Bang on a Can Marathon in 2014.

The Bang on a Can Marathon will celebrate its 30th anniversary in a new home across the East River. After many years in downtown Manhattan, the annual eight-hour celebration of contemporary classical music will take place at the Brooklyn Museum on Saturday, May 6.

The concert will be a part of the museum’s yearlong project “A Year of Yes: Reimagining Feminism,” and will include works by Meredith Monk, Julia Wolfe and Joan La Barbara. Ms. Wolfe, a co-founder of Bang on a Can and a Pulitzer Prize winner, will present her piece “Steel Hammer,” a folk ballad about John Henry and other railroad tales.

The Young People’s Chorus of New York City will perform Ms. La Barbara’s “A Murmuration for Chibok,” and two marathon mainstays, the Crossfire Steel Orchestra and the Asphalt Orchestra, will play sets. Amir ElSaffar will bring his Two Rivers Ensemble, playing a blend of Iraqi music and contemporary jazz.

While previous marathons have been free, this performance will require admission to the museum (although admission is free after 5 p.m. on its Target First Saturdays program).

The first marathon was organized by Ms. Wolfe, Michael Gordon and David Lang in 1987 in a SoHo art gallery; it has since been an annual fixture of downtown genre-crossing experimentalism. More information is at bangonacan.org.

reblogged from The New York Times 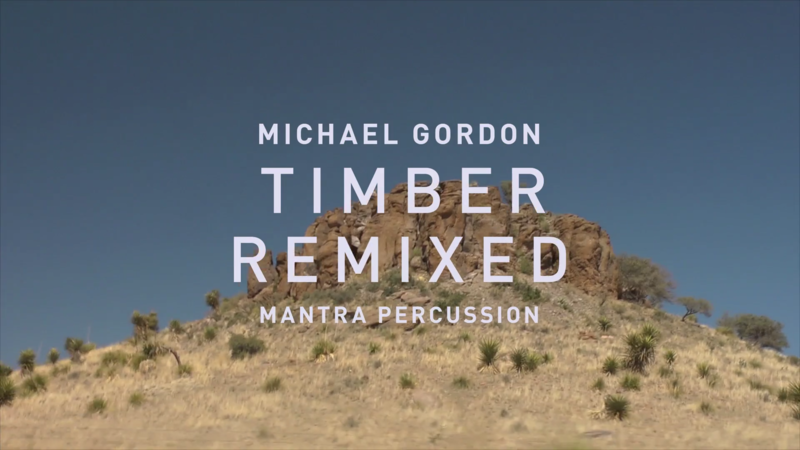 Listen to Fennesz's remix of Michael Gordon/Mantra Percussion, and preorder the album of 12 A-list electronic producers. 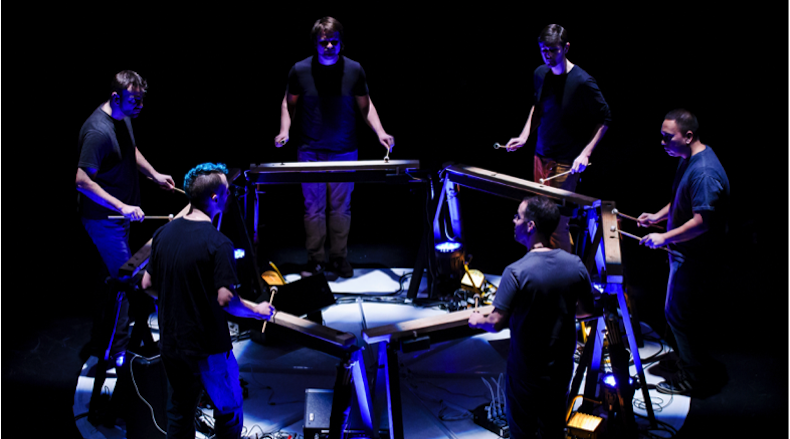 Back in 2011, Bang on a Can’s Michael Gordon released a five-part composition called Timber. Gordon plans to release a remix album of a new recording of the piece, performed by percussion ensemble Mantra Percussion, called Timber Remixed, on October 28 via Cantaloupe Music. It features remixes from Squarepusher, Oneohtrix Point Never, Fennesz, Tim Hecker, Hauschka, Jóhann Jóhannsson, and more. The announcement is accompanied by the Fennesz remix. Stream it below. Timber Remixed will be released on a limited edition vinyl containing six of the remixes, along with a two CD package that includes all 12 remixes, with a bonus disc featuring Mantra Percussion’s live performance of the original composition.

01 Mantra Percussion – Timber (live @ The Winter Garden, Bang on a Can Marathon) 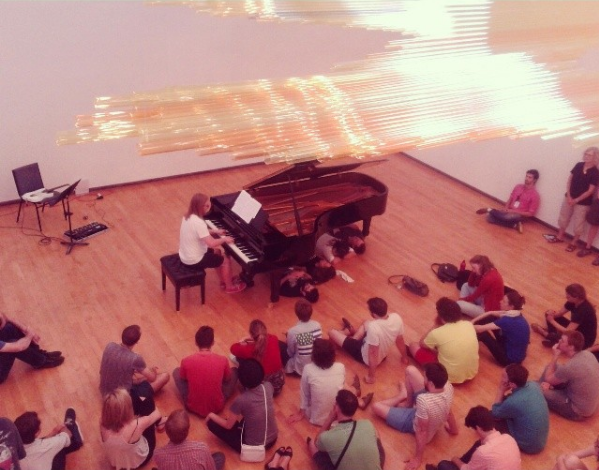 The Bang on a Can Summer Music Festival at MASS MoCA, the annual musical utopia for innovative musicians in the beautiful Berkshire Mountains of Western Massachusetts, is officially underway in for its 14th year. 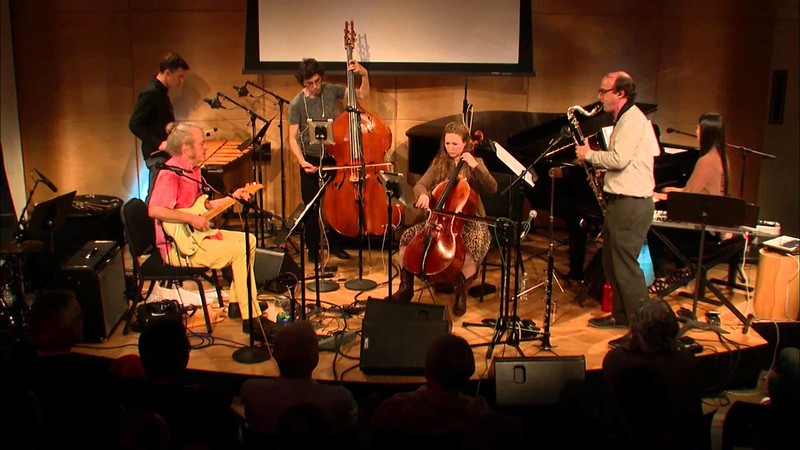 Bang on a Can All-Stars perform Field Recordings at the Barbican Centre, London:

Bang on a Can All-Stars will perform Julia Wolfe's Steel Hammer with Trio Mediaeval.

Bang on a Can All-Stars and Trio Mediaeval perform Julia Wolfe's Steel Hammer.

Bang on a Can brings its signature event, the Bang on a Can Marathon, to Rotterdam. With guests Ensemble Klang.

Louis Andriessen, Life (with films by Marijke Van Warmerdam)
Martyn Padding Fix/us
- performed by the Bang on a Can All-Stars

Pete Harden, forgiven (world premiere)
- performed by the Bang on a Can All-Stars & Ensemble Klang 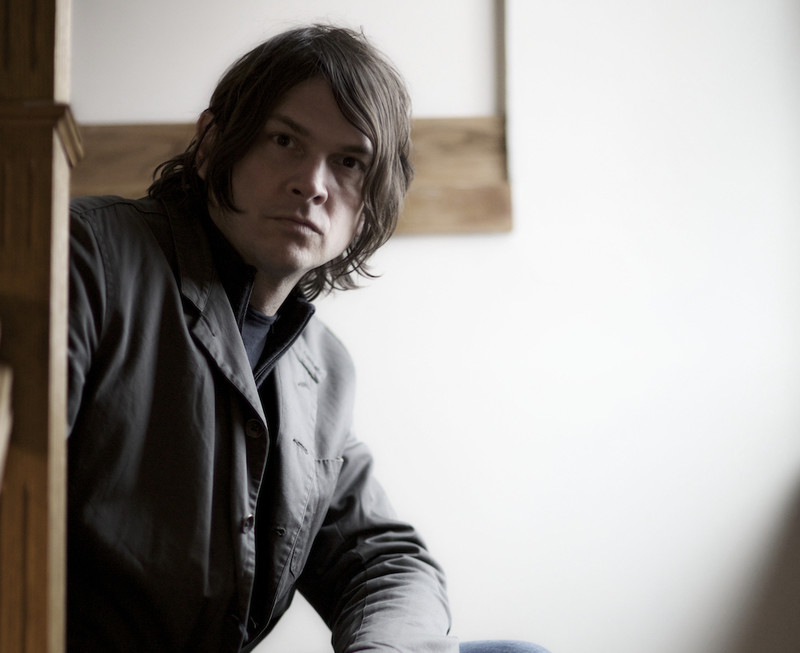 Glenn Kotche’s Drumkit Quartets explores the timbral, textural, melodic, and rhythmic possibilities of the drumkit through a series of pieces that were all written in different cities while Kotche was touring extensively with his rock band, Wilco. The quartets are paired with Kotche’s Migrations, which plays in the softest range of the instruments, with the players using fingers, bows, and even hair combs to coax the sounds out. In the second half of the program, Steve Mackey’s Before It Is Time features vocalist Shara Worden of My Brightest Diamond with the percussion group, in a piece inspired by the poetry of Isaac Maliya. The evening culminates with a Timeline, a sort of companion piece to Before It Is Time, composed by Sō Percussion and Shara Worden together.

So Percussion performs "It Is Time" by Steven Mackey 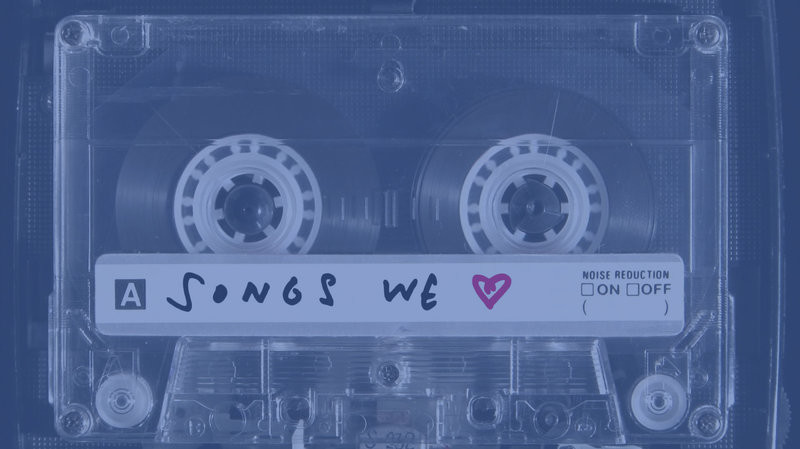 NPR Music's Favorite Songs Of 2015
featuring the Bang on a Can All-Stars' "An Open Cage," composed by Florent Ghys

Stay tuned for more as we gear up to celebrate Cantaloupe's 15th anniversary this year! 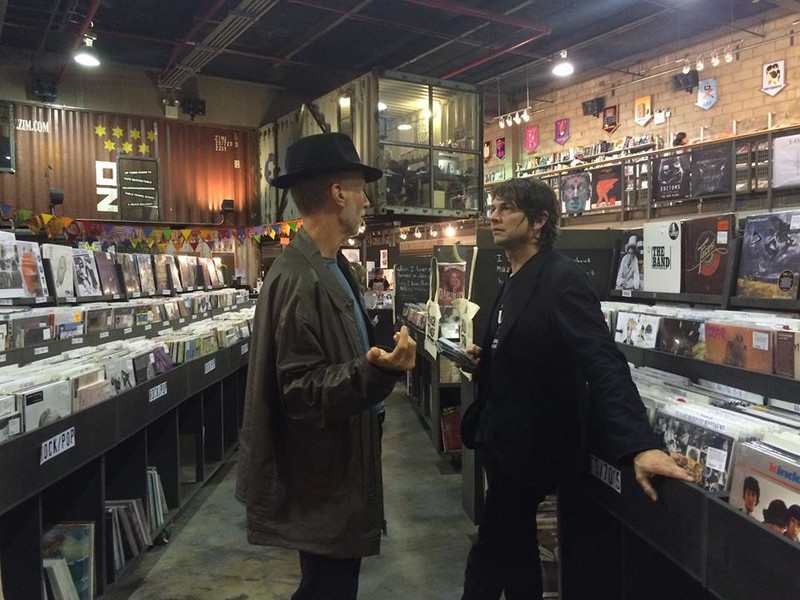 When John Luther Adams first conceived of the percussion-driven roots of Ilimaq in the mid-1990s, he was still uncertain of what direction the music wanted to take, and whether it could sustain itself as a sound installation or as a fully developed performance piece. Glenn Kotche, who happened to be a fan of JLA's work, and reached out to him when Wilco was on tour in Alaska in 2008, turned out to be the collaborator Adams was looking for. A drummer himself, JLA began to envision a piece of music that would demand physical endurance, mental stamina and in turn, almost a "trance state" from the performer. And as he writes in the liner notes for Ilimaq: "All these years later, in Glenn Kotche, I've found the drummer I always imagined I could be."

Ilimaq merges ambient soundscapes, based on electro-acoustic and environmental sounds that were recorded and edited by Adams in Alaska, with the powerhouse drumming of Kotche, who recorded his parts at Wilco's loft studio in Chicago. Split into five sections but meant to be a continuous listening experience, the 48-minute piece conjures up multi-hued references to the work of Brian Eno, Luc Ferrari and even Can and Cream, all in the course of a dream-like "spirit journey" that lives up to the original Iñupiaq (Alaska Inuit) meaning of the word.

You can get the double-disc package now (in stereo and 5.1 surround sound) at the Bang on a Can store. 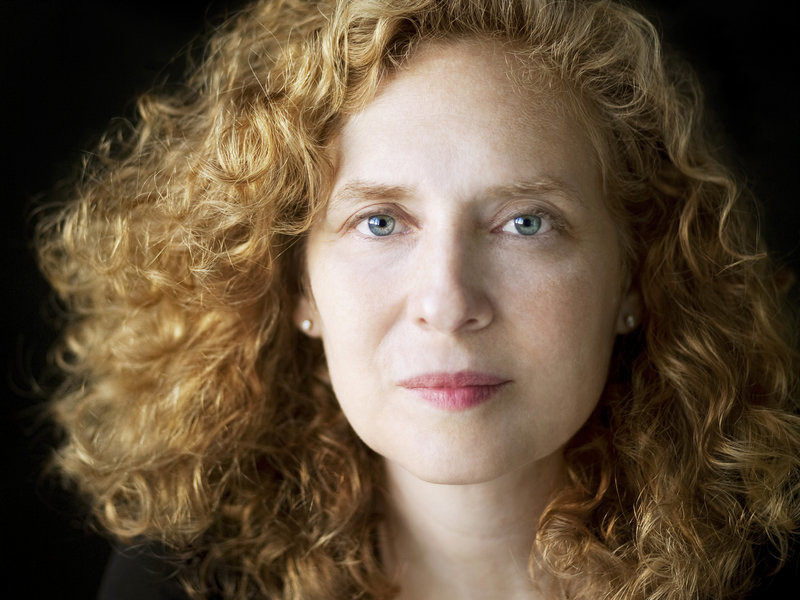 Back in April, Julia Wolfe received a call at her loft space in New York, and ignored it. The the 57-year-old composer was in the middle of a meeting with her colleagues from Bang on a Can, the new music collective she co-founded in the late 1980s, and anyway she didn't recognize the number. Moments later, the phone rang again; this time, it was Bang on a Can's director on the line. Wolfe picked up.

"And he said, 'Do you know what's going on out there? You just won the Pulitzer!'" Wolfe explains. "The whole office was screaming. It was a very, very sweet moment. We all put so much energy into making that piece happen." 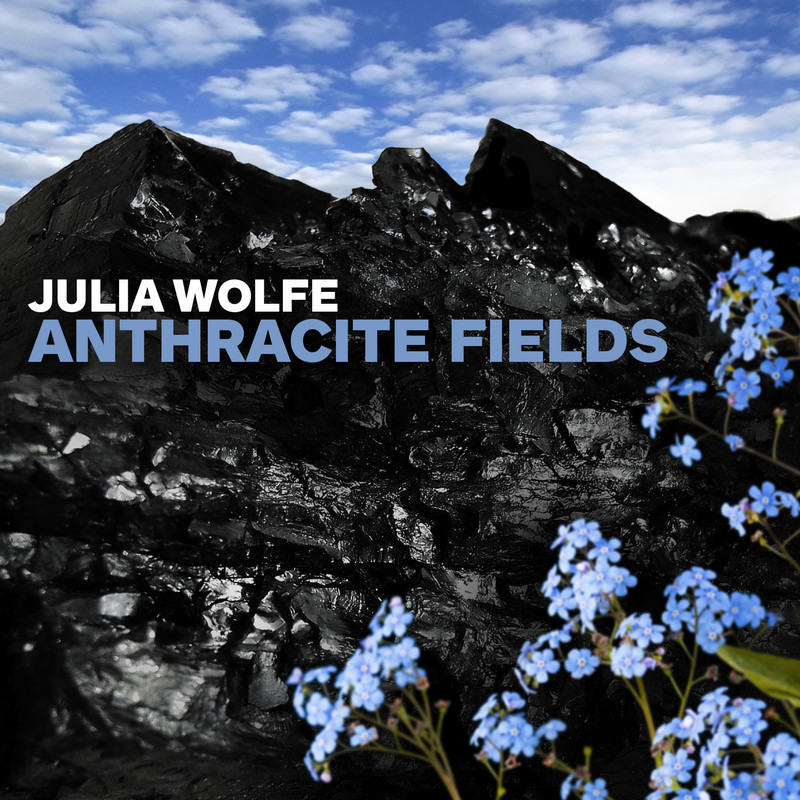 Julia Wolfe's Pulitzer Prize-winning oratorio for chorus and instruments, Anthracite Fields, is now streaming exclusively on Apple Music for one week. The pre-release album is also available exclusively on iTunes. Cantaloupe Music will release the CD package worldwide on September 25.

Wolfe wrote the piece after doing extensive research about the coal-mining industry in an area very near where she grew up in Pennsylvania. Her text draws on oral histories, interviews with miners and their families, speeches, geographic descriptions, children's rhymes and coal advertisements. The recording features the Bang on a Can All-Stars and The Choir of Trinity Wall Street, under the direction of Julian Wachner.

Julia Wolfe: Anthracite Fields (Bang on a Can All-Stars & The Choir of Trinity Wall Street)

New York Times' classical music critic Zachary Woolfe's listing for most anticipated recordings and performances includes Julia Wolfe's upcoming Anthracite Fields as one of the not-to-be-missed happenings in town. Read the listing below and check out the rest of the list, including a John Luther Adams program by JACK Quartet, Esa-Pekka Salonen's residency with the NY Philharmonic, and more:

‘ANTHRACITE FIELDS’ Julia Wolfe’s oratorio, an indictment of the exploitation of Pennsylvania coal miners, won the 2015 Pulitzer Prize and is now being released on record, featuring the Bang on a Can All-Stars and the Choir of Trinity Wall Street, conducted by Julian Wachner. Sept. 25. Cantaloupe Music. 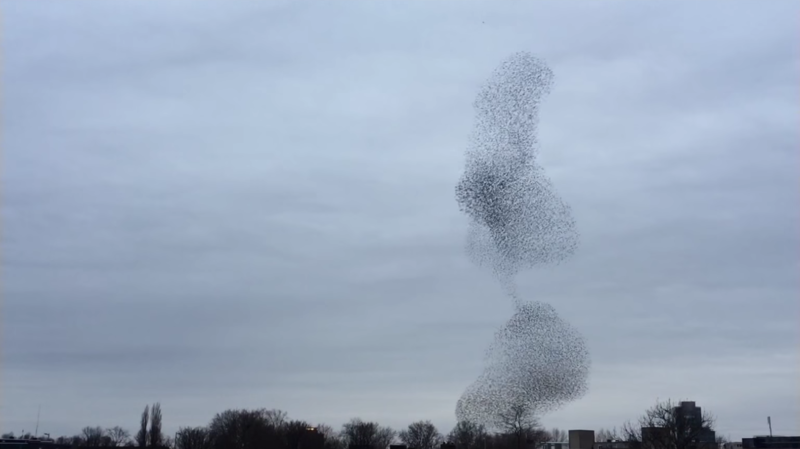 This timelapse film of an avian formation by Herbet S. of Utrecht is backed by the cascading arpeggios of the Bang on a Can All-Stars

The Bang on a Can All-Stars can be heard soundtracking Apple's latest commercial for the "Shot on iPhone 6" campaign. Gene Takes a Drink, a composition of Michael Gordon's penning from their newest album Field Recordings, backs a short video by the semi-anonymous "Herbert S." depicting a timelapse of a chattering of starlings flying in abstract formation. The beautifully orchestrated cascading arpeggios were paired with the film to highlighting the latest iPhone's high-res  variable framrate video camera. We think the two were paired well! See for yourself.

Shot on iPhone 6 by Herbert S.