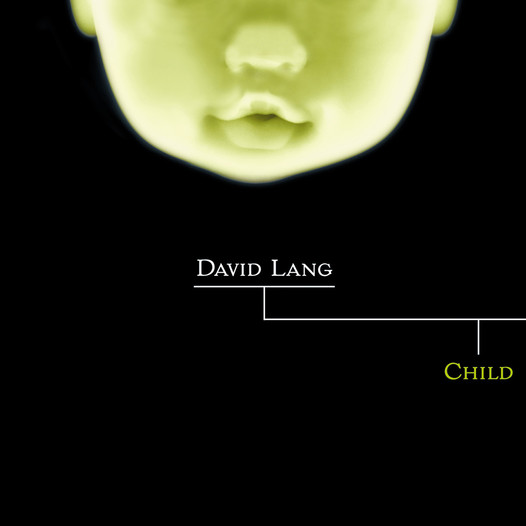 David Lang follows his  Cantaloupe debut, the passing measures, with this major new work for seven musicians. child is a powerful meditation on childhood and memory - sweet and simple on the surface, gentle musical fragments float by leaving faint traces of darkness in their wake. The result is at once dramatic, personal, intensely introspective, and piercingly beautiful.

Written in five separate parts for some of Europe's finest groups, child is recorded here by the Italian ensemble Sentierri Selvaggi.

on the concept of child

In the space of one month in 1999, by some strange coincidence, I received five commissions for almost the same instrumentation. The prospect of writing five practically identical pieces in a row seemed uninviting to me, so I came up with the idea of organizing these pieces around common themes, shared materials, and unorthodox doublings, such as having a flutist or violist play percussion. I was then able to link these pieces, as movements in a larger work. The larger work is called child.

child is my attempt to examine certain experiences as I remember (and misremember) them from my childhood. Each of the individual movements is in some way a memory of how I learned how to do something. Because I was taught (as most children are) that one learns how to perceive the world by making up rules it has been possible to apply these rules to musical environments.

I am not nostalgic for childhood, mine or anyone else's. It is not a point of child to show either how childhood is a time of great excitement or great disturbance, or that I miss it or that I suffered through it. What is most interesting to me, especially now that I have children of my own, is that childhood is the time when one learns how to think, how to feel, how to move forward. Because each piece of music in some way needs to teach its listener its own rules for how it works, it is a comparison I have found meaningful.

The phrase my very empty mouth is part of a sentence I was taught to help remember the order of the planets: mercury, venus, earth, mars, etc. Now I no longer remember the whole sentence, and the rest of the solar system has been lost. my very empty mouth (1999) is scored for flute, bass clarinet, piano, violin, viola and cello, and was written for Ensemble Alternance (Paris).

During a trip to the dentist, my oldest son Isaac was given laughing gas. The dentist called it sweet air, a gentle name to take the fear out of having a cavity filled. It worked. My son experienced something - a drug - so comforting that it made him ignore all signs of unpleasantness. This seemed somehow musical to me. One of music's traditional roles has always been to soothe the uneasy. I must say I have never been that interested in exploring this role. It is much easier to comfort the listener than to show why the listener might need to be comforted. My piece sweet air tries to show a little bit of both. In sweet air, simple, gentle musical fragments float by, leaving a faint haze of dissonance in their wake.

sweet air (flute, clarinet, piano, violin and cello) was written for Sentieri Selvaggi (Milan) and is dedicated to Louis Andriessen.

I wanted to write a piece in which a large amount of effort was expended to go a very small distance. short fall is that piece. Underneath all the activity in short fall the actual notes fall only very slightly. It is as if the surface is so active that the subtle effects of gravity pass (almost) unnoticed.

short fall (piccolo, piano, violin, and cello) was written for the Pearls Before Swine Experience (Stockholm) and is dedicated to Lynn Garon.

A child learns to draw by drawing lines. In the hands of a child a person is a stick figure, a skeletal intersection of stark lines, stripped of flesh, without subtle details. Only later does a child learn to add things - some hair, a dress, some shoes. Watching my children go through this stage has made me realize that my music is moving in the opposite direction. With every piece a little bit of flesh is removed, a little more skeleton is uncovered.

Small children get bored easily when traveling long distances by car. One way to distract them is to play the game "I spy with my little eye," in which you look out the window and describe something you have noticed. In my experience this does work, but in a very subdued way - it is not the most exciting way to pass the time. Eventually, however, time does pass.

little eye was commissioned by the Italian music festival Nuova Consonanza for the ensemble Alter Ego, and was premiered at the Opera Paese in Rome, Italy, 16 October 1999. 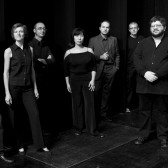