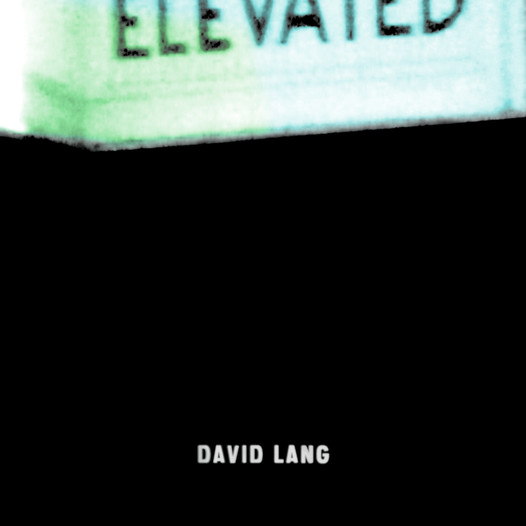 Dark, emotional, and exquisite, David Lang's elevated has premiere recordings of 3  works. Taken together, these pieces create a world in which consonance fights dissonance, hope struggles against hopelessness, and simple melodies are constantly beset by gravity, weight, and decay.

The DVD captures collaborations between Lang and three giants of contemporary visual arts: pioneer William Wegman, experimental filmmaker Bill Morrison (Decasia), and conceptual artist Matt Mullican. Setting an early (and controversial) Wegman video to music and giving music to Morrison and Mullican as centerpieces for new visuals, Lang uses his material as a way to open up different pathways for both the artists and their work - the results are stunning, moody, and sometimes very disturbing.

"My piece wed is from a larger series of piano works, called memory pieces. These eight pieces were all written between the years 1992-1997 and may be played separately or together. They were each written after the death of someone close to me, someone with whom I had a relationship that I wanted some way to hold on to. They are as follows:

"Kate Ericson, to whose memory wed is dedicated, was a young conceptual artist and a close friend of my wife. In her hospital bed, just before she died, she was married to her boyfriend and longtime collaborator, Mel Ziegler. A wedding is usually a joyful event, full of hope and optimism, but this wedding of course had something much darker hovering around the joyfulness. In my piece, the four independent lines of the piano part are made of small changes - a half step up, a whole step down, and each line by itself is not that interesting. Put together, however, they allow the music to rock oddly back and forth between major and minor, between consonance and dissonance, between hope and despair.

"One of the horrifying things about growing older is that your friends don't all grow older with you. People get sick and then they die. You watch, you try to comfort them, and then you try to comfort yourself. The true horror is that after a while your memories begin to fade. How long can you hold on to the sound of a voice, the memory of a strange event, a bittersweet feeling, a silly story?

"I was friends with all the dedicatees of the enclosed set of pieces - some were closer friends than others - and I have very personal memories of my dealings with them that I don't want to fade. Each of these little pieces highlights some aspect of my relationship with each friend. I hope this will help me hold on to these memories just a little while longer.

"There are a few ways to approach these pieces. In one respect they are inventions, each an intellectual and philosophical exploration of one distinct, mechanical way to make music. They are also little etudes, as each one highlights a different technical concern, such as overlapping arpeggios (spartan arcs), polyrhythmic counterpoint (wed) or strange cross-hands (cello). The way I choose to look at them is as laboratories for larger works. If I can incorporate the music or the ideas or the techniques of these little pieces into other works then I am in some way keeping something of my friendship alive.

"I would like to thank the different pianists who have either premiered one or more of these works or who have offered advice about how to edit or present these pieces - David Arden, Carlo Boccadoro, Anthony de Mare, Moritz Eggert, Lisa Moore, Andrew Zolinsky. Most of all I want to thank Yvar Mikhashoff - I was writing Yvar a piece when John Cage died (12 August 1992). I put that piece aside and wrote cage, which Yvar then played several times. Yvar was already ill then and it was his idea that I write a series of memorial pieces. If there is any one person to whom this entire set should be dedicated, it is Yvar."

"how to pray is a piece about a state of mind. It is about how to put yourself in the position to receive a certain kind of message, and how difficult it is to receive it.

"This piece comes out of a long-standing compositional project. For the past few years I have been setting the entire book of Psalms in an evening-length work for solo piano called Psalms Without Words. I have been transcribing my own cantillation of the psalms - the rhythms, the accents and the pacing of the Hebrew. I used a similar strategy to convert the prayer before saying the psalms into the music for how to pray.

"The reason why the psalms are so central to religious experience is that they are a comprehensive catalog of examples of how to talk to the Almighty, not by a prophet or a priest but in the voice of a single person, a person out in the world, with problems and concerns not unlike those faced by real people in all times. Of course, it's like reading one side of a correspondence - we can read King David's letters but the letters back are the ones we really want to see.

"I am not a religious person. I don't know how to pray. I do, however, know some of the times and places and formulas that are supposed to help make prayer possible. Sometimes I find myself sending those messages out. And then wait, secretly hoping that I will recognize the response.

"men is about men and their history. It is a theatricalization of the ritual struggle between a soloist and his own very human limitations - a solo trombonist is given a part that is so simple, so pure and so painfully slow that it cannot be performed completely. The trombone part is a solo not because it is musically in front of the others but because the struggle to perform it is in some way tragic and deserving of special attention. It neither leads, nor follows, nor fights against, nor is supported by the ensemble; rather, it is almost as if the soloist embodies the inner life of the ensemble itself. men is a sad march for the hopes and dreams of men.

"It is intended that men should be staged very simply, in near-darkness, with a spotlight on the trombone and the three locations to which the percussionists move during the piece. The staging itself should be ritualistic and very restrained - all that is needed is stand-lights for the ensemble, a bit of light for the trombone and percussion, some room to walk for the percussionists. In this way, Men may be performed in a concert hall, in a theater, in a factory, in a church.

david lang - how to pray