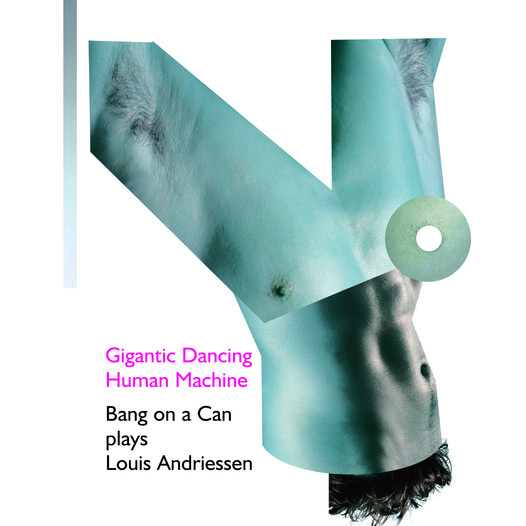 Dutch composer Louis Andriessen turned minimalism upside down in the 1970's with his radical musical responses to American experimentalists Reich, Riley and Glass. He challenged these composers' trance-like states with a European sense of edginess and angularity, and the results are exciting and overpoweringly aggressive.

Hoketus - the landmark of European minimalism - takes its name from the medieval art of hocketing, splitting a single melody between two groups of instruments separated in space. Earth-shattering and tribal in its elemental power, Andriessen described this piece as a Gigantic Dancing Human Machine. Its recording is an international collaboration of the Bang on a Can All-Stars, members of London's Icebreaker ensemble, and musicians from Andriessen's own group.

Workers Union and Hout both generate high-voltage energy out of wild unison melodies and rhythms. The Bang on a Can All-Stars have worked closely with Andriessen over the past 10 years, bringing to these works their intense dedication and extreme musicality while performing them all over the world.

"A fiercely aggressive group, combining the power and punch of a rock band with the precision and clarity of a chamber ensemble."
-The New York Times

Bang on a Can has played a number of works by Louis Andriessen over the years - it has always seemed to us that he is one of the European composers who listened hard to American music, coming up with his own solutions to our national musical problems. In America of the 1960s there were many composers who were experimenting with open forms - pieces that left something unspecified, like the choice of instruments, or the order of musical ideas, or the coordination of the individual parts. Cage's experiments with indeterminacy, Earle Brown's Available Forms, Frederic Rzewski's Coming Together, Terry Riley's In C, early Philip Glass and John Adams - a lot of composers were trying to find out how to take the controls away from making music. Workers Union (1975) is the young(ish) Louis Andriessen's contribution to this approach. Everything is specified in this piece except the notes - the rhythms, the phrases, the attitude are all there, but not the notes. It is clearly a piece that owes something to the American experimental tradition but what that thing is is hard to hear. To me, that's interesting. – David Lang

Essential to my work is the realization that each piece of music deals with other music. Since the mid-sixties, I have made a special study of the music of the fourteenth century and have been concerned with homophony in larger or smaller scorings. What is the difference between two people playing a melody and one person playing the same melody? And what about two people playing one note turn and turn about? The hocket technique of fast, alternate playing represents a highly radical approach to the problem. Though it went out of use in Western music around the fifteenth century, it is highly developed in various types of folk music, such as in pan-pipe ensembles in Peru and Bolivia and in African drum orchestras. The piece Hoketus emerged out of a minimal music project I started at the Conservatory of The Hague in 1976 and was given its first performance in 1977. It is scored for two groups, each consisting of pan-pipes, alto saxophone, bass guitar, pianos and congas. They play identical material, a chord or a single tone, but always in turn throughout the piece, so that one group never plays at the same time as the other. The amount of repetition of a bar or a group of bars is free, and a live performance can last anywhere from 15 to 50 minutes. The piece required a whole year of intensive rehearsal and constant testing out of ideas with the musicians in order to achieve the resulting gigantic, dancing machine humaine. With these musicians who worked on the development of the piece, I formed the ensemble Hoketus, which existed until 1987. It specialized exclusively in new music employing the hocketing technique and played in alternative small theatres and concerts." – Louis Andriessen

"In the seventies, like others who were marching in the streets, I wanted to make a revolution. I decided never again to compose for symphony orchestras because they don't like adventures and played only nineteenth-century music. So I formed an orchestra myself called De Volharding, which means "perseverance." The musicians were a combination of classically trained and jazz musicians, and the work was avant-garde minimal music that also dealt with jazz from the twenties. I don't feel comfortable with composers who always push ahead in one direction. I prefer the jacks-of-all-trades: the Purcells and Stravinskys, who are at home anywhere, borrowing here, stealing there, and who--don't forget--have composed much for theatre. I like the Bang On A Can cultural policy of changing the borders between uptown and downtown music, and I am very happy that they recognize in my music that same quality--it has the complex chromaticism of uptown music but pulls rhythms from jazz and pop. The use of the marimba and woodblocks explain the title of Hout, which means "wood." Although the whole work is in principle a strict canon, the successive voices are so close together that it is more like a melody sung in unison with ramifications." – Louis Andriessen 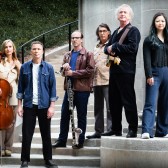 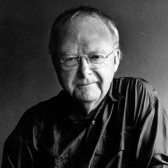