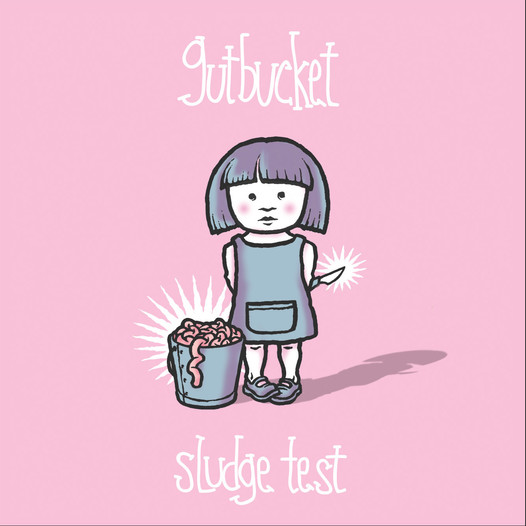 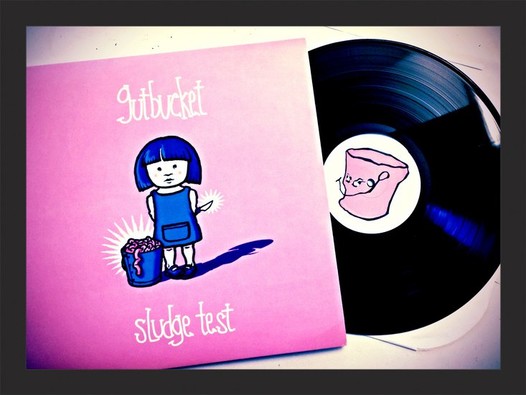 Gutbucket's third CD in its seven-year career finds them leaping further over the boundaries of rock and jazz, with a good dose of "other." Recorded 100% analog in San Francisco's legendary indie-rock haven Tiny Telephone Studios, Sludge Test adds a new recorded dimension to this international sensation.

The Story of Sludge Test

Zooming through the Alps or Croatia or somewhere on the trains in Europe, card games got tiresome, so the conversations back in spring 2004 naturally shifted to musical fantasies - how and when and where will we record the next album? We've got three more albums' worth of material in rotation at our live shows, so what's this next record all about?

We wanted an analog sound; you know, like how those classic records sounded in the 60s and 70s, but...like us. 2" tape was the way to go. We've got to finally do a real studio set-up where we skip the everything's-live-no-overdubs-purist-bullshit (see previous CD) and actually use the studio as an instrument, just like everyone else out there (except the jazzbo's and the White Stripes, so they claim).

Well, let's not record in NYC. Definitely not. Let's go somewhere else - Chicago, New Orleans, Seattle, San Francisco. Somewhere we can really set up shop outside our typical daily hustle. Let's send Paul on a not-so-wild-goose-chase to find a place with an engineer who will get it. Or at least get us. And we think this record will be a rock record - an instrumental rock record with ferocious energy. We'll splash Ken with water and his saxophone squonks will multiply like Gremlins. The bass will lurch and boom like a natural disaster, drums thundering and crashing, guitars blaring and screeching - this is where Gutbucket's music has been going these past few years - 3 to 4 minute joyful bursts of weird, noisy rock songs. Paul ventures forth...

Recalling our love for the Bay Area band Deerhoof, we find that they did a bunch of tracking with a young engineer/maven named Jay Pellici at Tiny Telephone Studios. Tiny Telephone? The place was founded by indie-rocker John Vanderslice to record his projects, so we're intrigued. Our Bay Area friends confirm that the place has lots of indie-cred and analog gear up the wazoo. Paul talks to Jay... Ty talks to Jay - Jay is a cool guy. We like him, and he's our new friend.

We take a year to save up some money, we book a fall tour to get us in shape, and then reserve 11 days in the studio beginning three weeks before Thanksgiving 2005. We pick 10 songs - no fucking around, no filler - 10 songs, 45 minutes. We propose a song order, we consider a production schedule, we start thinking about the cover art - shit, we're pretty geeked about this recording and want to use every minute in that studio to the fullest; though we're a little nervous. 11 days, and we've tracked, edited, and mixed a full record?

On November 7, rain greets us as we arrive in San Fran. We leave the airport and head straight for the studio - Jay is kind enough to let us in the night before to set up and shoot the shit. The place is on San Bruno in the Mission, past 25th street, near the freeway. It's at the end of a dead-end street inside a fenced-in complex of art studios and metal shacks. We have trouble finding the unmarked entrance, but once inside, we gaze at the lovely place we'll call home for the next week and a half. There's lots of toys - custom-made tube amps, vintage drums, analog synths, a Hammond B3. Plus Tiny Telephone is situated near one of San Francisco's finest late-night burrito joints - El Farolito - little did we know the sustaining power of a super carne asada or al pastor burrito. That night, we pick up dinner to go, go home to the friends and siblings who would house us over the next week and a half, and sleep.

Jay and his brother Ian supervise six days of tracking and five days of mixing - 12 to 16-hour sessions with short breaks for burritos, chocolate-covered almonds or pecans, and the occasional stroll under the surprisingly hot mid-November sun. Our daily schedule is rigorous, and limited only by our stamina. We have six 15-minute reels of tape and four brains' worth of ideas about what to do with the songs, so we go to town, lay down ideas, chuck some, add more, making the most of the 24 tracks we've got on each tune.

Unlike digital recording, where an edit can happen instantaneously - a punch-in here, a pitch-adjust there - analog tape requires time and care, and some early decision-making. Jay is a master with the tape, but our enthusiasm is softened by his quiet contemplation and the patience splicing requires. We have moments of repose built in to the process, and we carefully consider our decisions as Jay performs his surgery. Jay believes things should sound like they sound like; we set up mics with care, but add little processing to the sounds we've created naturally; instead, we layer. As the songs take shape, we hear more possibilities and get new ideas for the arrangements. A Wurlitzer here, a saxophone quartet there, a "scream-along" - the songs warp and develop all sorts of genetic mutations.

We enter a zone that involves nothing but slumbers, eats, walks to/from studio, and music-making. Slumber. Track. Eat. Walk. Track. Sleep. Nap. Playstation. Coffee. Track. Juice. Snack. Track. Track. We work and work and work, culminating in a triumphant 25-hour session that's only broken up by a rockin' second-wind show at the Hemlock Tavern and a 2 AM trip to Chinatown for pork dumplings and chow fun. Jay and Ian and Paul and Eric and Ty and Ken reach the finish line and the record's done. Amen.

The record begins with a triumvirate of gut-soundtrack-shorts. The opener "Money Management for a Better Life" clocks in at just over 2 minutes. It's a slap-boxing jab of unison-line oddities, building towards guitar feedback frenzies and dramatic closure... Without much time to breathe, the title track is our Bizarrelandia hit single, complete with 1/4-tone saxophones singing and power chords thrusting. And then "Punkass Rumbledink" visits evil punk rock clowns and off-kilter musical acrobatics - complete with four guitar tracks and two drum sets in one song!

With a fake-out "mellow tune" sound at the top, "Circadian Mindfuck" enters ground heavily influenced by Bulgaria's Ivo Papasov... which moves immediately into "Throsp%" - an other-worldly dreamscape nod to Godspeed You! Black Emperor's best recordings with Steve Albini - a build-and-swell of ethereal rock noise. "Disciplining the Fugitive" is a long-form tall-tale that delivers an eloquent build-up to furious saxophone shouts and prog-drum bursts. "Underbidder," named after the aforementioned heated train card games, settles into what might be the simplest yet intense moment on the disc. "Where Have you Gone Mr. Squeegeeman" was just too scary, new, and difficult for us to realize for the last record; being the oldest tune on Sludge Test, it was given a revamp and a new attitude. "The Plague of the Legions," a play on the US public school/baseball game chant of conformity, may be the most schizophrenic track, moving from punk shuffle to free-jazz drums and alto to an orgy of hard rock saxophone and bowed bass.

The harrowing conclusion of Sludge Test is Gutbucket's take on Frenchman Olivier Messiaen's sixth movement of the "Quartet for the End of Time" - itself the result of nearly 24 hours of tracking, splicing, overdubbing, and demon-summoning! 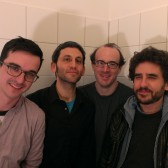