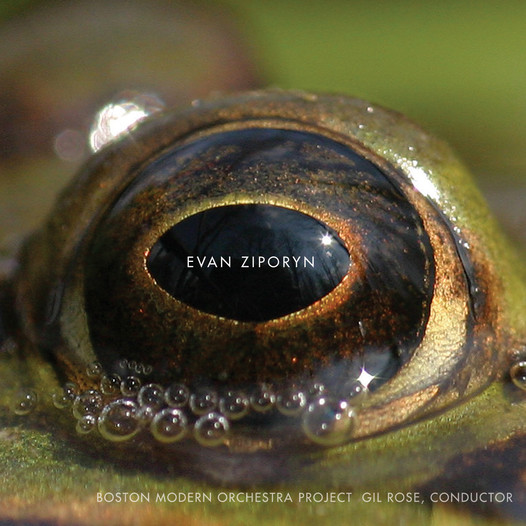 The four pieces that make up Frog's Eye form a vibrant narrative of sound and emotion. The album showcases Ziporyn's ability to reinvent standard ensembles through the savvy addition of Hawaiian guitar, electric piano, Tang dynasty poetry, and his own unique virtuosity on the bass clarinet. Together, these diverse musical influences ultimately create an album of expansive musical scope.

"These four stand-alone pieces, composed for different occasions and different ensembles, are an inadvertent symphony. Before this recording, I thought of their connection as simply chronological, i.e., a record of what's been on my mind for the past five years. Two are for orchestra and two are for wind ensemble; two involve soloists, one involves text. All were conceived for live performance, and yet the diversity of forces (electric piano in one piece; Hawaiian guitar in another) would make a complete, continuous performance unwieldy both logistically and financially. All have programmatic underpinnings and references of diverse and diffuse phylum. They aren't meant to go together. Yet as this disc took shape, Gil Rose's formidable Boston Modern Orchestra Project and NEC's perfect Jordan Hall unearthed a continuity of sound and feel, and then something more emerged: an emotional narrative of sorts, a clear four-movement topography. Life-affirming opener, meditation on death, a scherzo (dialectical and schizoid, though not in triple meter), and a final romp to the finish line. The four pieces take on an inevitable ordering: my Symphony #0, just in time for the end of the CD era.

"Reports of the orchestra's death are exaggerated, but for many years it was effectively dead to me. At best we were barely on speaking terms, after a long, intense relationship. I spent my childhood in the standard school and youth orchestras, and in fact wrote my first orchestra piece as an overly ambitious 14-year-old. We'll say no more about that one, but over the next twelve years, the orchestra was a regular part of my compositional palette. In the late 1980s I hit a wall. Weight of tradition, anxiety of influence, last burning embers of modernism, whatever - I felt compelled to make a choice: tow the line or burn down the concert hall. I didn't want to do either. So I built my own musical house, avoiding standard instrumental combinations, gathering materials from a musical path that included Bali, the overtones of the clarinet, and the hybrid electroacoustica of the Bang on a Can All-stars. A "large ensemble" to me was a gamelan augmented by electric guitars, or a cello overdubbed a dozen times. A ramshackle abode, to be sure, but my own. I still live there, and don't plan to leave. As for the "wind ensemble," some things need to be said. I started clarinet at age 8, and set my horizons on first chair in the Evanston All-city Concert Band. By high school it was the ETHS Symphonic Band, subsidized by the PE department in order to ensure a healthy marching band for Wildkat football games. As for "wind ensembles," I only knew of two: the Nederlands Blazers (I had a recording of them playing Stravinsky) and the legendary Eastman Wind Ensemble, which I was subsequently kicked out of (after one rehearsal, for apparently bureaucratic reasons) in 1977. The point being: the concert band (as I continue to think of it) is the focal point of every school-trained American wind player; upon graduation it generally disappears off the radar screen. It is huge among its practitioners and largely invisible to everyone else. It has a sound and, more importantly, a psychic ethos. It's what one quits when the garage band beckons. But it stays in the DNA. That's the deep background.

"In 2001, it was time to visit home, to re-engage with these "conventional forces," even if it meant writing music that wouldn?t fit on my computer screen. Music is social, and the orchestra concert is a gathering point, a kind of village commons. It's place to say what one has to say, clearly and directly. Composers have access to the soapbox, and that made the task straightforward: find the common ground. The various Boston-based ensembles who commissioned these pieces locate themselves outside the standard new music ghetto, yet hardly luxuriate in the high rent district: all have committed themselves in one form or another to a particular patch of real estate that involves championing new work while reaching out to larger audiences. This is true not just of BMOP but of the groups which premiered three of the four pieces on this CD, musician-driven, independent Pro Arte Orchestra and Fred Harris' remarkable, innovative MIT Wind Ensemble. I owe a debt of gratitude to these three groups, who collectively gave me the opportunity to speak in my own voice while still allowing the musicians to do what they do best." – Evan Ziporyn 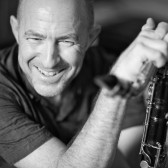 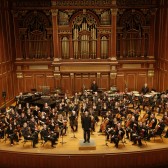